You are running a Linux server at home, which is behind a NAT router or restrictive firewall. Now you want to SSH to the home server while you are away from home. How would you set that up? SSH port forwarding will certainly be an option. However, port forwarding can become tricky if you are dealing with multiple nested NAT environment. Besides, it can be interfered with under various ISP-specific conditions, such as restrictive ISP firewalls which block forwarded ports, or carrier-grade NAT which shares IPv4 addresses among users.

What is Reverse SSH Tunneling?

One alternative to SSH port forwarding is reverse SSH tunneling. The concept of reverse SSH tunneling is simple. For this, you will need another host (so-called "relay host") outside your restrictive home network, which you can connect to via SSH from where you are. You could set up a relay host using a VPS instance with a public IP address. What you do then is to set up a persistent SSH tunnel from the server in your home network to the public relay host. With that, you can connect "back" to the home server from the relay host (which is why it's called a "reverse" tunnel). As long as the relay host is reachable to you, you can connect to your home server wherever you are, or however restrictive your NAT or firewall is in your home network. 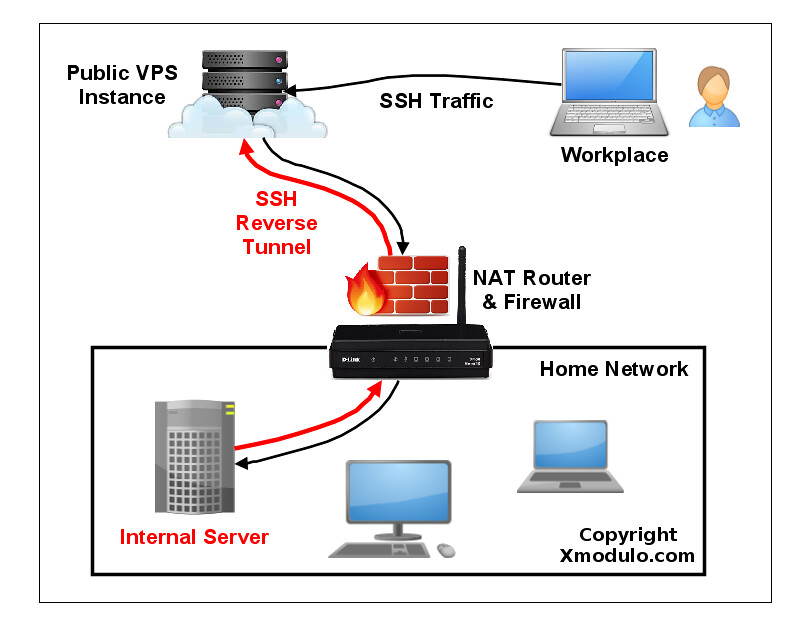 Set up a Reverse SSH Tunnel on Linux

On homeserver, open an SSH connection to relayserver as follows.

Here the port 10022 is any arbitrary port number you can choose. Just make sure that this port is not used by other programs on relayserver.

With "-fN" option, SSH will go right into the background once you successfully authenticate with an SSH server. This option is useful when you do not want to execute any command on a remote SSH server, and just want to forward ports, like in our case.

After running the above command, you will be right back to the command prompt of homeserver.

Connect Directly to a NATed Server via a Reverse SSH Tunnel

While the above method allows you to reach homeserver behind NAT, you need to log in twice: first to relayserver, and then to homeserver. This is because the end point of an SSH tunnel on relayserver is binding to loopback address (127.0.0.1).

But in fact, there is a way to reach NATed homeserver directly with a single login to relayserver. For this, you will need to let sshd on relayserver forward a port not only from loopback address, but also from an external host. This is achieved by specifying GatewayPorts option in sshd running on relayserver.

Log in to relayserver and confirm with netstat command that a reverse SSH tunnel is established successfully.

Now from any other computer (e.g., clientcomputer), type the following command to gain access to NATed homeserver.

In the above command, while 1.1.1.1 is the public IP address of relayserver, homeserver_user must be the user account associated with homeserver. This is because the real host you are logging in to is homeserver, not relayserver. The latter simply relays your SSH traffic to homeserver.

Set up a Persistent Reverse SSH Tunnel on Linux

Now that you understand how to create a reverse SSH tunnel, let's make the tunnel "persistent", so that the tunnel is up and running all the time (regardless of temporary network congestion, SSH timeout, relay host rebooting, etc.). After all, if the tunnel is not always up, you won't be able to connect to your home server reliably.

For a persistent tunnel, I am going to use a tool called autossh. As the name implies, this program allows you to automatically restart an SSH session should it breaks for any reason. So it is useful to keep a reverse SSH tunnel active.

As the first step, let's set up passwordless SSH login from homeserver to relayserver. That way, autossh can restart a broken reverse SSH tunnel without user's involvement.

Next, install autossh on homeserver where a tunnel is initiated.

From homeserver, run autossh with the following arguments to create a persistent SSH tunnel destined to relayserver.

The "-M 10900" option specifies a monitoring port on relayserver which will be used to exchange test data to monitor an SSH session. This port should not be used by any program on relayserver.

The "-fN" option is passed to ssh command, which will let the SSH tunnel run in the background.

The rest of reverse SSH tunneling related options remain the same as before.

If you want an SSH tunnel to be automatically up upon boot, you can add the above autossh command in /etc/rc.local.

In this post, I talked about how you can use a reverse SSH tunnel to access a Linux server behind a restrictive firewall or NAT gateway from outside world. While I demonstrated its use case for a home network via a public VPS, you must be careful when applying it for corporate networks. Such a tunnel can be considered as a breach of a corporate policy, as it circumvents corporate firewalls and can expose corporate networks to outside attacks. There is a great chance it can be misused or abused. So always remember its implication before setting it up.

How to enable ssh with ESXi 3.5
How to clean up disk space on Linux
How to monitor a Linux server and desktop remotely from web browser
How to set up a Samba file server to use with Windows clients
How to configure HTTP load balancer with HAProxy on Linux
How to combine two graphs on Cacti