With incessant security threats, intrusion detection system (IDS) has become one of the most critical requirements in today's data center environments. However, as more and more servers upgrade their NICs to 10GB/40GB Ethernet, it is increasingly difficult to implement compute-intensive intrusion detection on commodity hardware at line rates. One approach to scaling IDS performance is multi-threaded IDS, where CPU-intensive deep packet inspection workload is parallelized into multiple concurrent tasks. Such parallelized inspection can leverage multi-core hardware to scale up IDS throughput easily. Two well-known open-source efforts in this area are Suricata and Bro.

In this tutorial, I am going to demonstrate how to install and configure Suricata IDS on Linux server.

Let's build Suricata from the source. You first need to install several required dependencies as follows.

Once you install all required packages, go ahead and install Suricata as follows.

First, download the latest Suricata source code from http://suricata-ids.org/download/, and build it. As of this writing, the latest version is 2.0.8.

Here is the example output of configuration.

Now compile and install it.

The above rule installation command will download the current snapshot of community rulesets available from EmergingThreats.net, and store them under /etc/suricata/rules. 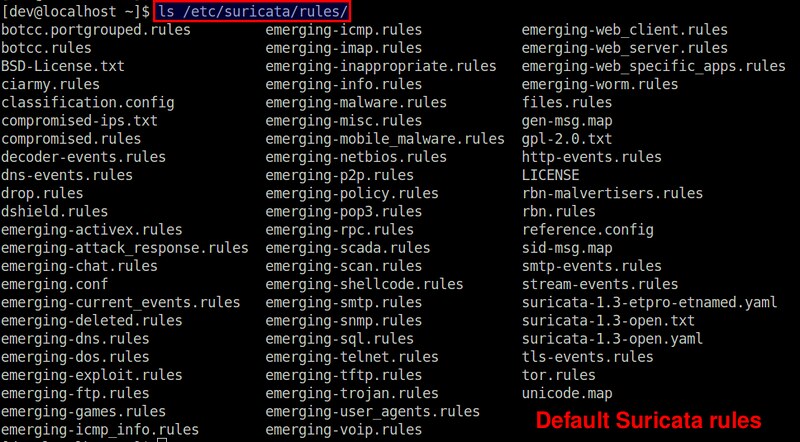 Now it's time to configure Suricata. The configuration file is located at /etc/suricata/suricata.yaml. Open the file with a text editor for editing.

Here are some basic setup for you to get started.

The "default-log-dir" keyword should point to the location of Suricata log files.

Under "vars" section, you will find several important variables used by Suricata. "HOME_NET" should point to the local network to be inspected by Suricata. "!$HOME_NET" (assigned to EXTERNAL_NET) refers to any other networks than the local network. "XXX_PORTS" indicates the port number(s) use by different services. Note that Suricata can automatically detect HTTP traffic regardless of the port it uses. So it is not critical to specify the HTTP_PORTS variable correctly.

The "host-os-policy" section is used to defend against some well-known attacks which exploit the behavior of an operating system's network stack (e.g., TCP reassembly) to evade detection. As a counter measure, modern IDS came up with so-called "target-based" inspection, where inspection engine fine-tunes its detection algorithm based on a target operating system of the traffic. Thus, if you know what OS individual local hosts are running, you can feed that information to Suricata to potentially enhance its detection rate. This is when "host-os-policy" section is used. In this example, the default IDS policy is Linux; if no OS information is known for a particular IP address, Suricata will apply Linux-based inspection. When traffic for 192.168.122.0/28 and 192.168.122.155 is captured, Suricata will apply Windows-based inspection policy.

Under "threading" section, you can specify CPU affinity for different Suricata threads. By default, CPU affinity is disabled ("set-cpu-affinity: no"), meaning that Suricata threads will be scheduled on any available CPU cores. By default, Suricata will create one "detect" thread for each CPU core. You can adjust this behavior by specifying "detect-thread-ratio: N". This will create N*M detect threads, where M is the total number of CPU cores on the host.

With the above threading settings, Suricata will create 1.5*M detection threads, where M is the total number of CPU cores on the system.

For more information about Suricata configuration, you can read the default configuration file itself, which is heavily commented for clarity.

Now it's time to test-run Suricata. Before launching it, there's one more step to do.

When you are using pcap capture mode, it is highly recommended to turn off any packet offloead features (e.g., LRO/GRO) on the NIC which Suricata is listening on, as those features may interfere with live packet capture.

Here is how to turn off LRO/GRO on the network interface eth0:

Note that depending on your NIC, you may see the following warning, which you can ignore. It simply means that your NIC does not support LRO.

Suricata supports a number of running modes. A runmode determines how different threads are used for IDS. The following command lists all available runmodes. 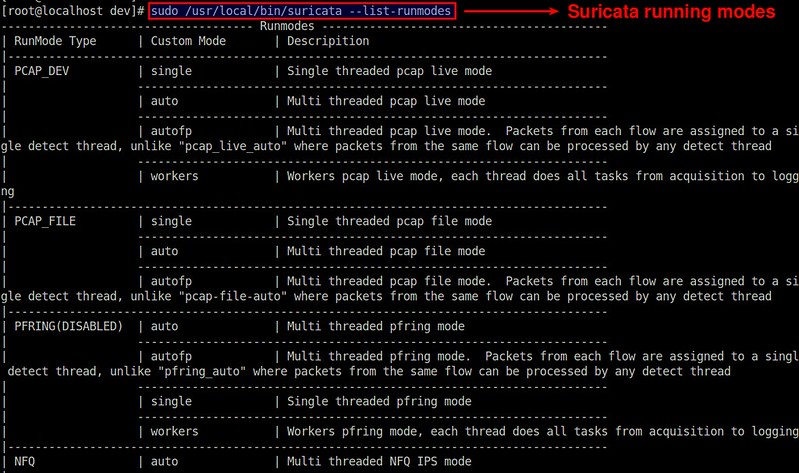 The default runmode used by Suricata is autofp (which stands for "auto flow pinned load balancing"). In this mode, packets from each distinct flow are assigned to a single detect thread. Flows are assigned to threads with the lowest number of unprocessed packets.

Finally, let's start Suricata, and see it in action.

In this example, we are monitoring a network interface eth0 on a 8-core system. As shown above, Suricata creates 13 packet processing threads and 3 management threads. The packet processing threads consist of one PCAP packet capture thread, and 12 detect threads (equal to 8*1.5). This means that the packets captured by one capture thread are load-balanced to 12 detect threads for IDS. The management threads are one flow manager and two counter/stats related threads.

Here is a thread-view of Suricata process (plotted by htop). 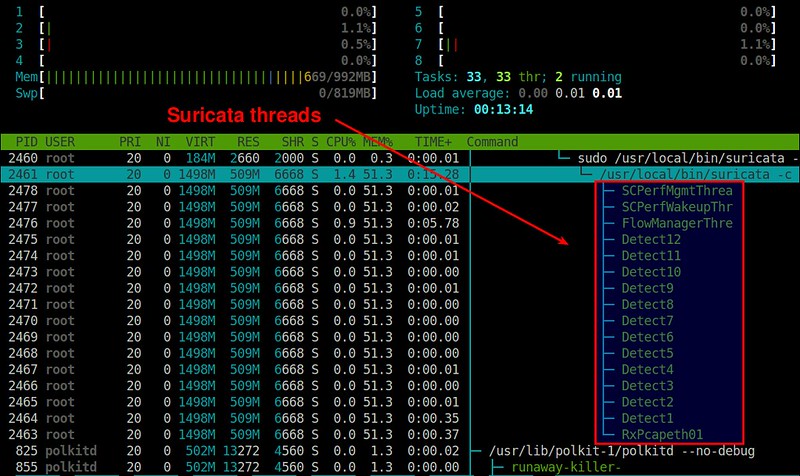 For ease of import, the log is also available in JSON format:

In this tutorial, I demonstrated how you can set up Suricata IDS on a multi-core Linux server. Unlike single-threaded Snort IDS, Suricata can easily benefit from multi-core/many-core hardware with multi-threading. There is great deal of customization in Suricata to maximize its performance and detection coverage. Suricata folks maintain online Wiki quite well, so I strongly recommend you check it out if you want to deploy Suricata in your environment.

Are you currently using Suricata? If so, feel free to share your experience.

How to enable X11 forwarding using ssh
How to PGP encrypt, decrypt or digitally sign files via GnuPG GUI on GNOME Desktop
How to clean up disk space on Linux
How to secure a mail server using encryption
How to block network traffic by country on Linux
How to improve the security of Magento e-commerce website