Today, August, 25th, is the 23rd birthday of Linux. The modest Usenet post made by a 21 year old student at the University of Helsinki on August 25th, 1991, marks the birth of the venerable Linux as we know it today.

Fast forward 23 years, and now Linux is everywhere, not only installed on end user desktops, smartphones and embedded systems, but also fulfilling the needs of leading enterprises and powering mission-critical systems such as US Navy's nuclear submarines and FAA's air traffic control. Entering the era of ubiquitous cloud computing, Linux is continuing its dominance as by far the most popular platform for the cloud.

Celebrating the 23rd birthday of Linux today, let me show you some interesting facts and history you may not know about Linux. If there is anything to add, feel free to share it in the comments. In this article, I will use the terms "Linux", "kernel" or "Linux kernel" interchangeably to mean the same thing.

2. According to openhub.net, the majority (95%) of Linux is written in C language. The second popular language for Linux is assembly language (2.8%). The dominance of C lanaguage over C++ is no surprise given Linus's stance on C++. Here is the programming language breakdown for Linux.

3. Linux has been built by a total of 13,036 contributors worldwide. The most prolific contributor is, of course, Linus Torvalds himself, who has committed code more than 20,000 times over the course of the lifetime of Linux. The following figures show the all-time top-10 contributors of Linux in terms of commit counts. 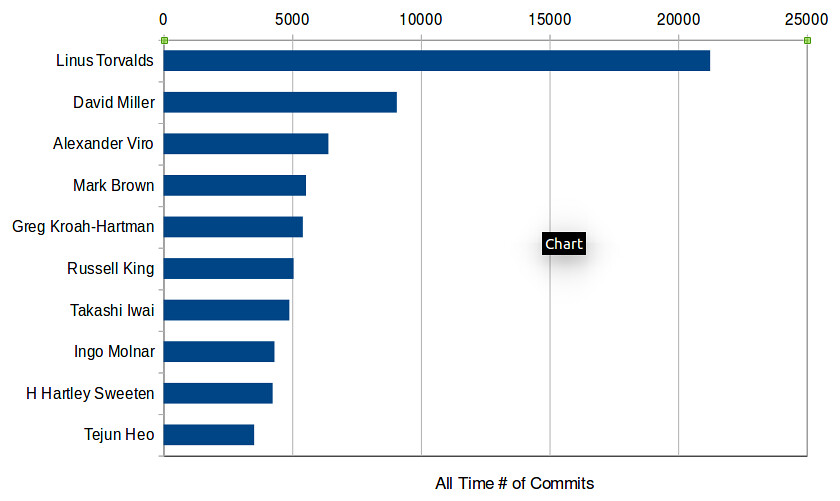 4. The total source lines of code (SLOC) of Linux is over 17 million. The estimated cost for the entire code base is 5,526 person-years, or over 300M USD according to basic COCOMO model.

5. Enterprises have not been simply consumers of Linux. Their employees have been actively participated in the development of Linux. The figure below shows the top-10 corporate sponsors of Linux kernel development, in terms of total commit counts from their employees, as of year 2013. They include commercial Linux distributors (Red Hat, SUSE), chip/embedded system makers (Intel, Texas Instruments, Wolfson), non-profits (Linaro), and other IT power houses (IBM, Samsung, Google). 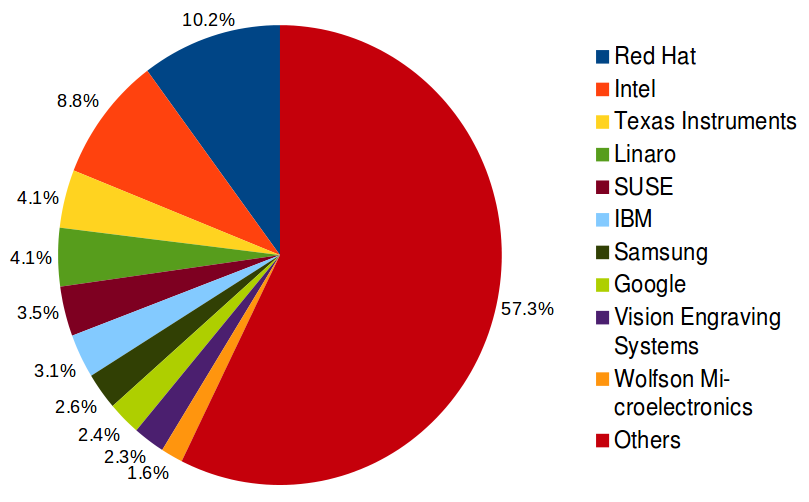 6. The official mascot of Linux is "Tux", a friendly penguin character. The idea of using a cuddly penguin as a mascot/logo was in fact first conceived and asserted by Linus himself. Why penguin? Personally Linus is fond of penguins, despite the fact that he once was bitten by a ferocious penguin, causing him infected with a disease.

7. A Linux "distribution" contains the Linux kernel, supporting GNU utilities/libraries, and other third-party applications. According to distrowatch.com, there are a total of 286 actively maintained Linux distrutions. The oldest among them is Slackware whose very first release 1.0 became available in 1993.

8. Kernel.org, which is the main repository of Linux source code, was compromised by an unknown attacker in August, 2011, who managed to tamper with several kernel.org's servers. In an effort to tighten up access policies of the Linux kernel, Linux foundation recently turned on two-factor authentication at the official Git repositories hosting the Linux kernel.

9. The dominance of Linux on top 500 supercomputers continues to rise. As of June 2014, 97% of the world-fastest computers are powered by Linux.

10. Spacewatch, a research group of Lunar and Planetary Laboratory at the University of Arizona, named several asteroids (9793 Torvalds, 9882 Stallman, 9885 Linux and 9965 GNU) after GNU/Linux and their creators, in recognition of the free operating system which was instrumental in their asteroid survey activities.

11. In the modern history of Linux kernel development, there was a big jump in kernel version: from 2.6 to 3.0. The renumbering to version 3 actually did not signify any major restructuring in kernel code, but was simply to celebrate the 20 year milestone of the Linux kernel.

12. In 2000, Steve Jobs at Apple Inc. tried to hire Linus Torvalds to have him drop Linux development and instead work on "Unix for the biggest user base," which was OS X back then. Linus declined the offer.

13. The reboot() system call in the Linux kernel requires two magic numbers. The second magic number comes from the birth dates of Linus Torvalds and his three daughters.

14. As his favorite text editor, Linus uses something called uEmacs/PK, which is a customized version of MicroEMACS, a lightweight Emacs-like editor.

15. In 2003, there was an attempt to insert a backdoor in the Linux kernel source hosted in a CVS repository which apparently had been broken into. Disguised as an innocuous error checking routine, the backdoor was designed to obtain root privileges under specific conditions. This backdoor never made it to the mainline kernel, and was caught by kernel maintainers.

16. While the Linux kernel is licensed under GNU GPL, which requires any code derived from the Linux kernel be open-sourced under the same license, many essential proprietary device drivers and binary-only firmware are incorporated in the Linux kernel as loadable modules. In fact, these binary blobs fall into a gray area where they might not be considered derived work in a sense that they are not designed solely for Linux but also for other operating systems as well. Linus' stance on this matter has been pragmatic, allowing the kernel to link into proprietary blobs, but he does not mind throwing occasional rants at them. Opposed to such liberal interpretation, Linux-libre is a GNU movement which strips all the proprietary blobs of the kernel, and consists of 100% free software only.

17. Linus Torvalds is well known for having very strong opinions about many things related to Linux, and does not mind using harsh or even abusive language to get his message across. Here are a few of his famous (but non-abusive) quotes:

18. With so many fans of Linux around the world, there are criticisms on current Linux distributions (mainly desktops), such as limited hardware support, lack of standardization, instability due to short upgrade/release cycles, etc. During the Linux kernel panel at LinuxCon 2014, Linus was quoted as saying "I still want the desktop" when asked where he thinks Linux should go next.

19. Linux kernels have weird and funny code names. For example, the code name for the latest kernel 4.0 is "Hurr durr I'ma sheep." These code names are authored by Linus Torvalds himself, and included in the Makefile of their source trees.

If you know any interesting facts about Linux, feel free to share them in the comments.

5 thoughts on “Interesting facts about Linux”