Network monitoring is a critical IT function for businesses of all sizes. The goal of network monitoring can vary. For example, the monitoring activity can be part of long-term network provisioning, security protection, performance troubleshooting, network usage accounting, and so on. Depending on its goal, network monitoring is done in many different ways, such as performing packet-level sniffing, collecting flow-level statistics, actively injecting probes into the network, parsing server logs, etc.

In this category, monitoring tools capture individual packets on the wire, dissect their content, and display decoded packet content or packet-level statistics. These tools conduct network monitoring from the lowest level, and as such, can possibly do the most fine-grained monitoring at the cost of network I/O and analysis efforts.

1. dhcpdump: a comman-line DHCP traffic sniffer capturing DHCP request/response traffic, and displays dissected DHCP protocol messages in a human-friendly format. It is useful when you are troubleshooting DHCP related issues.

2. dsniff: a collection of command-line based sniffing, spoofing and hijacking tools designed for network auditing and penetration testing. They can sniff various information such as passwords, NSF traffic, email messages, website URLs, and so on.

3. httpry: an HTTP packet sniffer which captures and decode HTTP requests and response packets, and display them in a human-readable format.

4. IPTraf: a console-based network statistics viewer. It displays packet-level, connection-level, interface-level, protocol-level packet/byte counters in real-time. Packet capturing can be controlled by protocol filters, and its operation is full menu-driven. 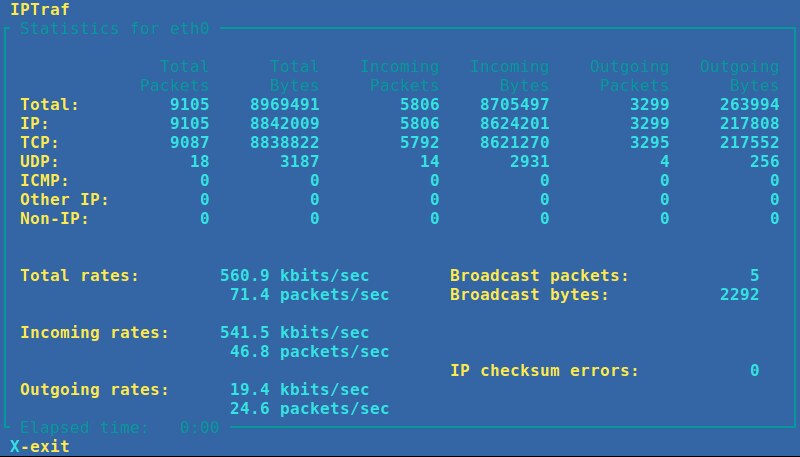 5. mysql-sniffer: a packet sniffer which captures and decodes packets associated with MySQL queries. It displays the most frequent or all queries in a human-readable format.

6. ngrep: grep over network packets. It can capture live packets, and match (filtered) packets against regular expressions or hexadecimal expressions. It is useful for detecting and storing any anomalous traffic, or for sniffing particular patterns of information from live traffic. 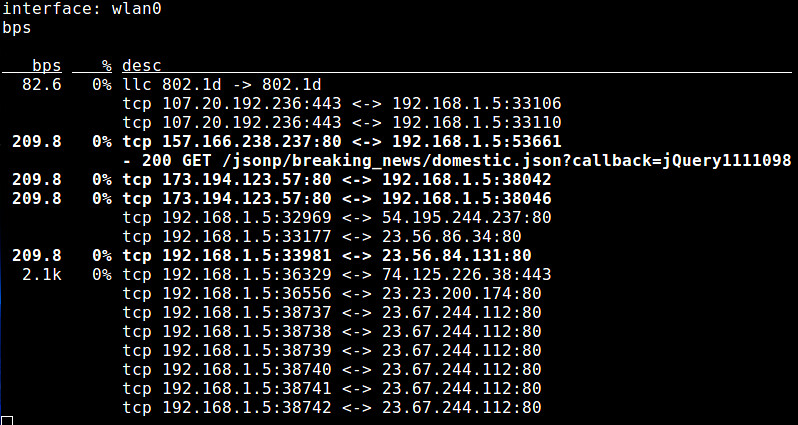 9. Snort: an intrusion detection and prevention tool which can detect/prevent a variety of backdoor, botnets, phishing, spyware attacks from live traffic based on rule-driven protocol analysis and content matching.

10. tcpdump: a command-line packet sniffer which is capable of capturing nework packets on the wire based on filter expressions, dissect the packets, and dump the packet content for packet-level analysis. It is widely used for any kinds of networking related troubleshooting, network application debugging, or security monitoring.

11. tshark: a command-line packet sniffing tool that comes with Wireshark GUI program. It can capture and decode live packets on the wire, and show decoded packet content in a human-friendly fashion.

In this category, network monitoring is done by classifying network traffic into flows, associated processes or interfaces, and collecting per-flow, per-process or per-interface statistics. Source of information can be libpcap packet capture library or sysfs kernel virtual filesystem. Monitoring overhead of these tools is low, but packet-level inspection capabilities are missing. 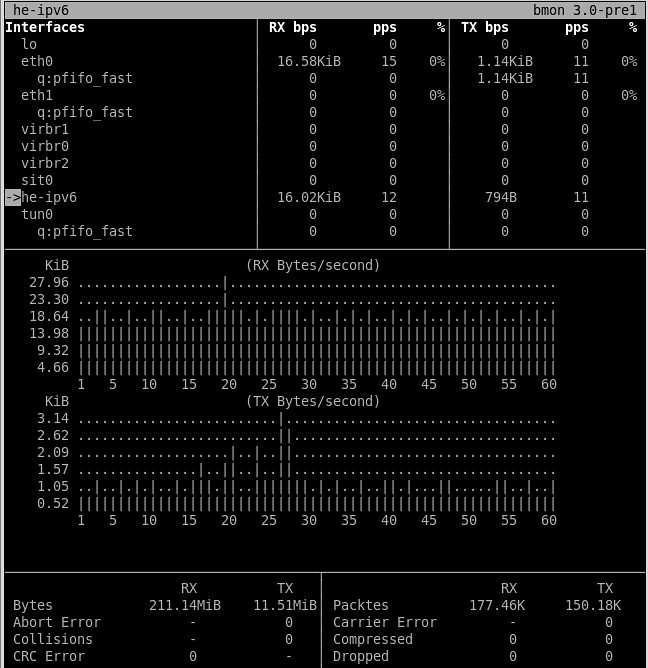 14. nethogs: a process monitoring tool which offers a real-time view of upload/download bandwidth usage of individual processes or programs in an ncurses-based interface. This is useful for detecting bandwidth hogging processes.

16. speedometer: a console-based traffic monitor which visualizes the historical trend of an interface's RX/TX bandwidth usage with ncurses-drawn bar charts. 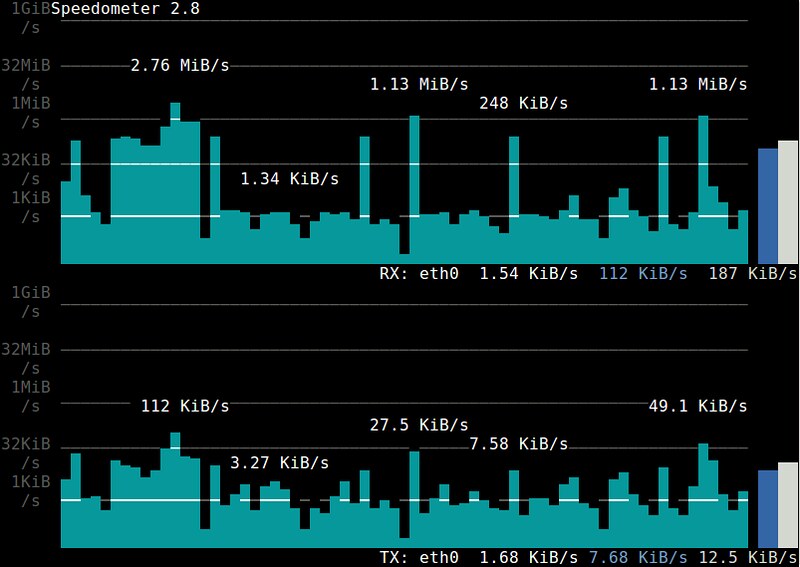 17. sysdig: a comprehensive system-level debugging tool with a unified interface for investigating different Linux subsystems. Its network monitoring module is capable of monitoring, either online or offline, various per-process/per-host networking statistics such as bandwidth usage, number of connections/requests, etc. 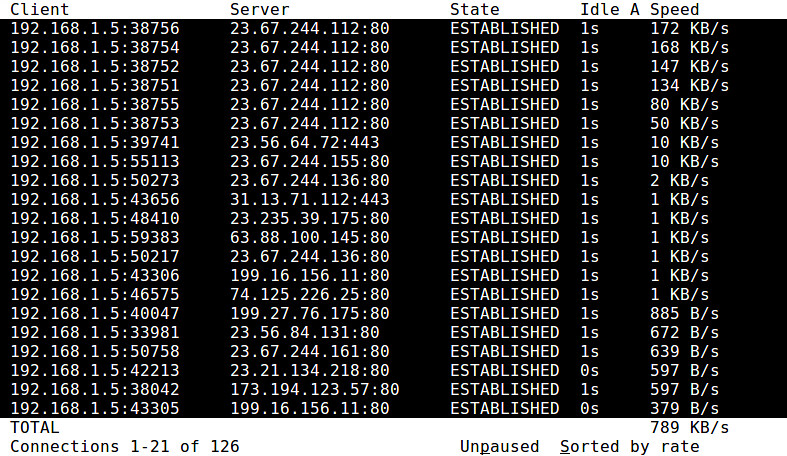 19. vnStat: a command-line traffic monitor which maintains a historical view of RX/TX bandwidh usage (e.g., current, daily, monthly) on a per-interface basis. Running as a background daemon, it collects and stores interface statistics on bandwidth rate and total bytes transferred.

Unlike passive monitoring tools presented so far, tools in this category perform network monitoring by actively "injecting" probes into the network and collecting corresponding responses. Monitoring targets include routing path, available bandwidth, loss rates, delay, jitter, system settings or vulnerabilities, and so on.

20. dnsyo: a DNS monitoring tool which can conduct DNS lookup from open resolvers scattered across more than 1,500 different networks. It is useful when you check DNS propagation or troubleshoot DNS configuration.

21. iperf: a TCP/UDP bandwidth measurement utility which can measure maximum available bandwidth between two end points. It measures available bandwidth by having two hosts pump out TCP/UDP probe traffic between them either unidirectionally or bi-directionally. It is useful when you test the network capacity, or tune the parameters of network stack. A variant called netperf exists with more features and better statistics.

22. netcat/socat: versatile network debugging tools capable of reading from, writing to, or listen on TCP/UDP sockets. They are often used alongside with other programs or scripts for backend network transfer or port listening.

23. nmap: a command-line port scanning and network discovery utility. It relies on a number of TCP/UDP based scanning techniques to detect open ports, live hosts, or existing operating systems on the local network. It is useful when you audit local hosts for vulnerabilities or build a host map for maintenance purpose. zmap is an alernative scanning tool with Internet-wide scanning capability.

24. ping: a network testing tool which works by exchaning ICMP echo and reply packets with a remote host. It is useful when you measure round-trip-time (RTT) delay and loss rate of a routing path, as well as test the status or firewall rules of a remote system. Variations of ping exist with fancier interface (e.g., noping), multi-protocol support (e.g., hping) or parallel probing capability (e.g., fping). 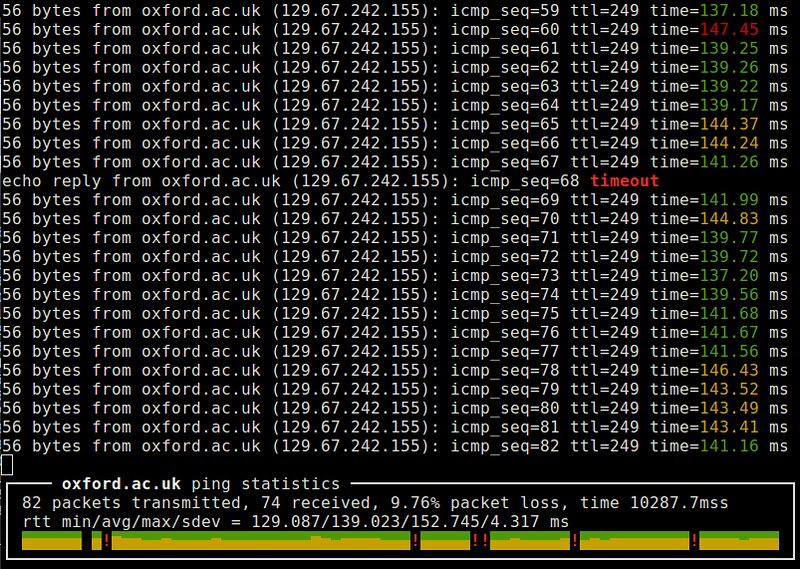 26. traceroute: a network discovery tool which reveals a layer-3 routing/forwarding path from a local host to a remote host. It works by sending TTL-limited probe packets and collecting ICMP responses from intermediate routers. It is useful when troubleshooting slow network connections or routing related problems. Variations of traceroute exist with better RTT statistics (e.g., mtr).

27. GoAccess: a console-based interactive viewer for Apache and Nginx web server traffic. Based on access log analysis, it presents a real-time statistics of a number of metrics including daily visits, top requests, client operating systems, client locations, client browsers, in a scrollable view. 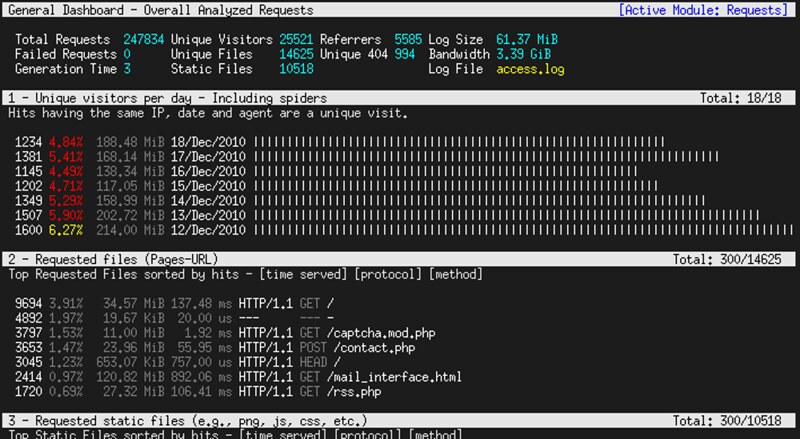 28. mtop: a command-line MySQL/MariaDB server moniter which visualizes the most expensive queries and current database server load. It is useful when you optimize MySQL server performance and tune server configurations.

29. ngxtop: a traffic monitoring tool for Nginx and Apache web server, which visualizes web server traffic in a top-like interface. It works by parsing a web server's access log file and collecting traffic statistics for individual destinations or requests.

In this article, I presented a wide variety of command-line network monitoring tools, ranging from the lowest packet-level monitors to the highest application-level network monitors. Knowing which tool does what is one thing, and choosing which tool to use is another, as any single tool cannot be a universal solution for your every need. A good system admin should be able to decide which tool is right for the circumstance at hand. Hopefully the list helps with that.

How to install OpenVPN on CentOS or Redhat
How to find Ethernet network interface card information in Linux
How to check Internet speed from the command line on Linux
How DNS works
Linux TCP/IP networking: net-tools vs. iproute2
How to monitor and troubleshoot a Linux server using sysdig